My sister sent me a letter with these stamps. In December 2020, the cinema celebrated its 125th anniversary. Thanks to the Swiss Post, I was reminded of this. The birthday party was bigger 25 years ago ...

I love these stamps illustrated by Michael Stünzi. Cinema culture changed in the 125 years of its existence. On the left stamp a scene with the projector used by the Lumières is shown, in the middle can be seen classic rolls of film, and on the right there is a digitally presented 3D experience. The cinema audience wears the fashion of the respective era.

I like the creative idea that everyone is sitting in the same two rows, connected through the times (look at the different chairs!) - and printed as stamps together. Maybe the girl left is the older woman in the middle. And the man with the mustache in the middle could be the old man on the right. The projectionists were not forgotten either. Even if I would have liked it better if the woman in the middle had worn dungarees...
Times are changing and the cinema as a place looking films together will continue. Hopefully! Let's be creative!
Eingestellt von cinepostcard Keine Kommentare: 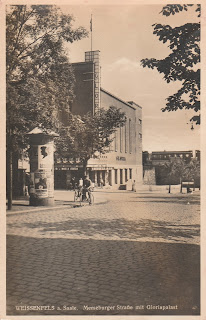 I met the Gloria cinema in Weissenfels in summer 2013. On the way to the holidays destination on the Unstrut river, we got off the train with our bikes in Weissenfels. And immediately came across this impressive building (look the train on the postcard). It's a big box, unfortunately empty for many years.
The Gloria has had better days. It was opened on October 18, 1928. The architect was Carl Fugmann. The remarkable building in the Bauhaus style impresses with its nested cubes, slotted windows with originally preserved lattice division and a corner structure with brick strips. The neon sign Gloria was placed directly on the street. The cinema had 1.200 seats and was also used for congresses and variety events. It was already equipped with modern air conditioning and red plush armchairs.
It is a really big cinema for a city with 40.000 inhabitants. But Weissenfels is (or was?) an important industrial city, famous for shoe manufacturing and the food industry.
In 1991, the UFA-Theater AG took over the cinema. In 1994 a discotheque moved into the building, which had to close three years later. The building was emergency secured in 2019. And it is a listed historical monument. It was never parted in smaller halls.
The postcard was printed shortly after the opening. You can see at the cinema advertising for the film Dulderin Weib / Tesha with Maria Corda. This film was released in German cinemas in 1928.
The postcard was sent in October 1943. Pierre wrote to his wife Suzan. He was a French slave laborer in Weissenfels and worked in a factory that was on the same street as the cinema. He walked past the cinema every day. I hope Pierre and Suzan saw each other again ...
I met another cinema designed by Carl Fugmann in my next holidays, the Centralkino in Wittenberg.
Vielen Dank an Greta, die mir die Postkarte übersetzte!
Eingestellt von cinepostcard Keine Kommentare:

This is already my 25th postcard showing Kino International in Berlin (counted according to the poster motif). The postcard is extra large (21,4 cm x 10,3 cm) and was sold with an envelope. It was made by Graphokopie H. Sander K.G. Berlin and was published by Berlin Werbung Berolina.

The poster on the cinema building advertises the film Die Perle / The Pearl / La perla - a 1947 Mexican-American film directed by Emilio Fernández. It is based on the 1947 novella The Pearl by John Steinbeck, who also co-wrote the screenplay.

In 2002, the film was selected for preservation in the United States National Film Registry by the Library of Congress as being "culturally, historically, or aesthetically significant".

The poster was designed by Horst Klöpfel. 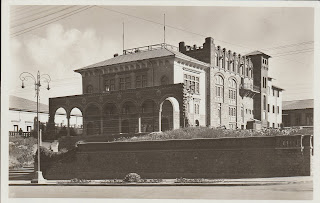 Cinema Teatro in Asmara - today Teatro Asmara - is a late eclectic historicism building in Asmara, the capital of Eritrea, and part of the UNESCO World Heritage Site  Asmara: A Modernist City of Africa.

The building was designed as an opera house and was completed in 1920 according to plans by Odoardo Cavagnari (1868–1920). The design of the immediate area could no longer be completed, as the sponsoring company went bankrupt in 1924.

The as yet unused area in the vicinity of the opera house fell to the state, which sold it to investors in 1927, who built shops and a dance hall here 10 years later. The opera house itself has been converted into a cinema. Since then, there has been a café in the foyer. The building was used as a cinema until 1957.

After the federation of Eritrea and Ethiopia in 1952, under pressure from the Ethiopian viceroy, the building was sold to the state by the Italian owners at a price that was far below its value, and according to other sources, it was sold to a son-in-law of the then Ethiopian emperor, Haile Selassie.

After Eritrea gained independence in 1991/93, it was transferred to the state property of the new state. The main office of the national telephone provider Eritel is located in a side building and the actual opera house is occasionally used as a theater.

In Asmara there are still other worth seeing cinemas like Cinema Impero, Cinema Roma and Cinema Odeon.