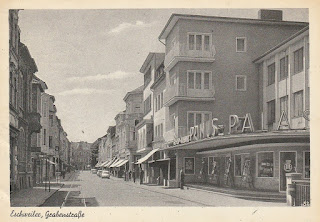 Der neue Primus-Palast (The new Primus-Palace) in Eschweiler near Aachen is not the first cinema called Primus in Eschweiler.
The first Primus-Palast opened on 4 September 1928 in Englerthstrasse. It had 1200 seats, and burned out in 1944.
An interim cinema was makeshiftly prepared in June 1947 in the Schützenhalle as Primus in der Schützenhalle.
In 1953, a newly built Primus-Palast opened in Grabestrasse with the color film Maske in Blau / Mask in Blue (West Germany, 1953). A dignified place to stay. Tasteful fabric coverings, fine wood paneling and a strong, profiled stucco ceiling with indirect lighting give the auditorium a festive note. Particularly attractive: the large stage with a parade curtain illuminated from above. This is the cinema on the 1958 sent postcard.
Just 10 years later, on 12 October 1963, the cinema closed and a supermarket was housed in the building. There is still a supermarket on this address, and probably still in the old cinema building.
Later the Primus-Palast moved with its name to the building of the Capitol- a 1957 opened cinema with 682 seats, later departed intwo halls. It existed as the last cinema in Eschweiler until autumn 2020. Look here a last sad shot from the Primus Palast Eschweiler.
At all - there were four cinemas called Primus in Eschweiler from 1928 till 2020.
Eingestellt von cinepostcard