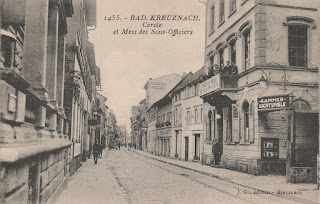 A postcard full of history.

This cinema in Bad Kreuznach opened on 16th November 1907 by Gottfried Heym.

The first presentations were in an extension of the restaurant "Zum Freischütz". Today there is a multiplex cinema with 9 halls and 1400 seats. For more than 100 years, the family Heym-Sawatzki has entertained not only the residents of Bad Kreuznach with movies. Now in the fifth generation.

The cinema wears the name Kammer-Lichtspiele between 1920 and 1970.

After World War I, Bad Kreuznach and the Rhineland was occupated by the French military from 1918 to 1930. Many buildings such as gyms, halls, houses and apartments were confiscated as quarters for the soldiers and civilian employees. (There is a research project being carried out by the University of Mainz about this time.)

Among the occupied building there was also this cinema. It was now "Cercle et Mess des Sous-Officiers" - a non-commissioned officer circle and mess. And a cinema, too. Look at the posters at the entrance.

The postcard was maybe sent. There is written "F.M." instead a stamp. That means "Franchise Militaire". During the entire period of French occupation, normal mail sent by members of the army to France or the colonies in North Africa, where many occupation soldiers came from, was free of charge. The unit's vaguemestre also stamped the postage on the mail items delivered to him, thus confirming the sender's right to postage exemption. And this stamp is missed on the postcard. So the postcard can't dated- unfortunately. 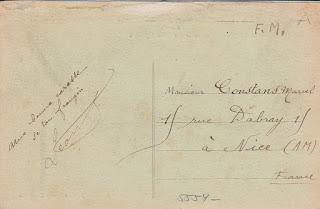 This postcard is a souvenir from Léon to his brother Marcel Constans in Nice. Is Léon in the photo himself? It would be too nice to know who the five men, two women and the child on the balcony are. Is the man in the door the owner of the building? Could the German inhabitants visit cinemas during this years? What kind of movies were shown for the French people? 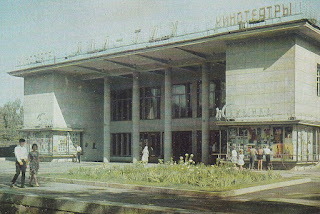 The building was a typical Soviet cinema building. Its architects were Evgeny Dyatlov and Igor Popov. The auditorium originally accommodated 780 people. Alatau has also become a kind of cinema center. Here meetings were held with prominent persons from cinema and theater. Together with the Bureau of Propaganda of Soviet Cinema, the Young Friend of Cinema club was organized, as well as clubs for patriotic, legal and atheistic education.

In July 2002 the cinema was reopened after restoration with 592 seats. The cinema was closed in 2013 and was destroyed in October 2015.

Today you can find a McDonald's restaurant on this place.