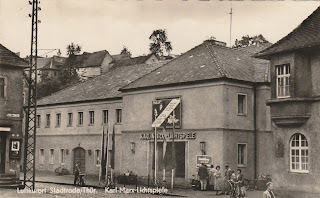 Stadtroda is a city with about 5.000 inhabitants in Thuringia. It has a castle and an old monastery, and no more cinema.
The cinema Karl-Marx-Lichtspiele opened in 1955 and closed in 1991. It was newly built with apartments above the cinema hall.
You can see bove the entrance a poster for the film Zwei Mütter / Two Mothers (East Germany 1957, directed by Frank Beyer).
The film was Frank Beyer's graduation film at the Film School of the Academy of Performing Arts (FAMU) in Prague. The film tells the story of two women, one French and the other German, who fight for a child who has been mistakenly taken by the Germans after a bomb raid.
In 1974, Frank Beyer directed the film Jakob der Lügner / Jacob the Liar - the only East German picture ever selected for the Academy Award for Best Foreign Language Film.
Eingestellt von cinepostcard Keine Kommentare: 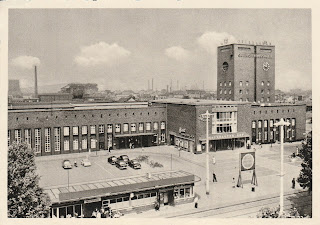 Bali - sounds like wide world and adventure, and only means Bahnhofs-Lichtspiele - Railway Station Cinema. So you can see on this 1959 sent postcard the railway station in Oberhausen and about in the middle the lettering BALI above the showcases and BALI Kino left above the main entrance.

From 1930 to 1934, the station was built in the classic modern style. The Oberhausen architect Schwingel and the Reichsbahnoberrat Karl Herrmann designed the current building with a clear and calm cubist design language.

During the World War II, the station was badly damaged. The reception building hall could not be put back into operation until 1954 in a greatly modified form, a false ceiling was put in to install the Bali cinema in the upper part, and a small shopping arcade was created below it.

The BALI cinema opened as a newsreel cinema operated by AKI (Aktualitätenkino AG). These newsreel cinemas opened with the aim of reducing the waiting time for rail passengers to get to their train connection. The more televisions there were at the homes, the less important newsreel cinemas became. From 1982 there were shown sex films not only in BALI Oberhausen. And finally it was closed in 1984.

Another former newsreel cinema in my collection: Filmtheater Hauptbahnhof in Dresden