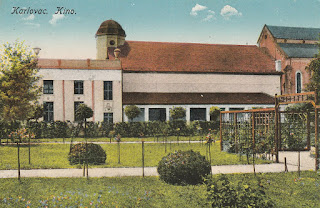 The Edison Cinema was designed and built between 1918 and 1920 based on a project by the Zagreb architects Bruno Bauer and Ed Schoen. It is the first cinema in Croatia, built only for this purpose. There were 470 seats. And it was also the biggest cinema in Croatia.

In the 1930’s, sound films were introduced and in 1957 the first Cinemascope projection took place. From the beginning, Edison has been the most comfortable cinema house in Karlovac and it has always had premiere films on its repertoire.

The cinema is now closed because of renovation. It is going to reopen in 2023. After renovation and equipment, Edison will have two cinemas with a total of 260 seats.

The postcard was sent in 1926 and is still well preserved.