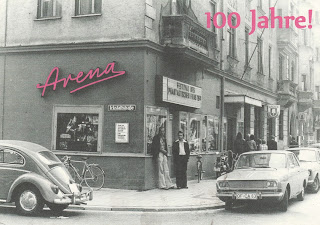 The Arena cinema has been delighting people since 1912. It is the fourth oldest cinema in Munich. And it is not one of the biggest. It started with one hall in with about 120 places. It was a cinema for the neighborhood, soldiers, maids. And it is still today a place for everybody loving movies.
In 2012, the hall was departed in two tiny halls: one with 64, one with 38 seats.
The photo on the postcard was taken in September 1974. Cinema advertises Festival des Phantastischen Films 1974. There was shown movies like Der Flug zur Hölle / The Land Unknown (USA 1957), Das grüne Blut der Dämonen /  Quatermass and the Pit (USA 1967), Die Rache der Pharaonen / The Mummy (UK 1959), Frankensteins Ungeheuer / The Evil of Frankenstein (UK 1964).
The postcard is a clever made ad card. You got a free ticket, sent the postcard to a friend and came with friend and postcard to the cinema. 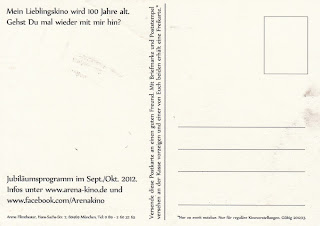 There was published also a booklett about Arena on the occasion of the 100th birthday: Nie bedeutend ... aber immer noch da by Winfried Sembdner. 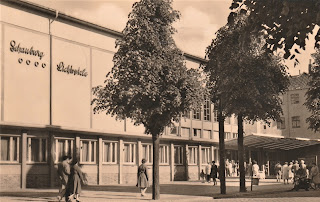 The Schauburg cinema was built between 1958 and 1960 by Hochbau Schwerin according to plans by the architect E.-M. Hetzer. It was the second cinema at this place. In 1914, the cinema Welttheater was set up in a former steel factory building. Around 1930 the name was changed to Schauburg. Since this building was in very bad condition after the war, it was closed in 1958.
The new Schauburg had 712 places and also the technic for showing 70mm films.
In 1993, the cinema had a new owner - Kieft & Kieft, but it had to be closed in September 2005 due to fire safety shortcomings. The cinema was closed for more than a year, until in September 2006, a new operator re-opened the cinema under the name Moviestar.
Today the cinema has 4 halls with 354, 122, 122 and 22 places, modern technology and fire protection systems.
The postcard is published in 1962. In the showcase you can see advertising for a movie titled something with Abenteuer (Adventure). It could be the 1960 Soviet movie Das Millionenabenteuer / Спасите наши души / Save our souls directed by Aleksei Mishurin, came to East German cinemas in May 1961.
Eingestellt von cinepostcard Keine Kommentare: 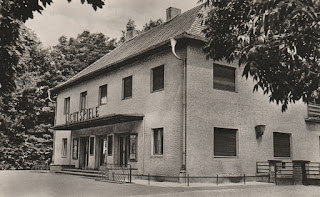 Calau is a community with about 7.700 inhabitants today.
The cinema was opened in 1938 with 375 seats, maybe in a new building. Its name was Kurmark-Lichtspiele. After 1950, it was only called Lichtspiele. Now it is closed.
But people of Calau can still go to the movies. The Protestant parish operates since 2013 a program cinema with a regular program once a month. Movies are shown in the community room in the parish hall next to the church.
Eingestellt von cinepostcard Keine Kommentare: 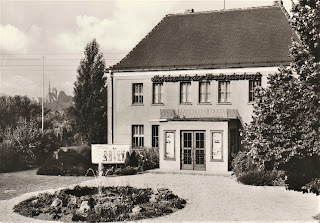 Wünschendorf is a community in Thuringia, today with about 2.800 inhabitants and no cinema.
I couldn't find any facts about this cinema. Andreas Praefcke lists on Carthalia an older postcard from 1966.
At all, the building looks like other East German Socialist cinema buildings. I think it was built about 1960 to bring culture to the village. It is now closed.
The postcard is from 1973. The cinema advertises the 1966 Italian film Unser Boß ist eine Dame /  Operazione San Gennaro / Treasure of San Gennaro. It came to East German screens on 29 March 1968.
The name Lichtspiele der Freundschaft (Cinema of Friendship) was a common name for cinemas in East Germany. Above all, it refers to the friendship with the Soviet Union. But everybody loves going to the movies with friends.
Eingestellt von cinepostcard Keine Kommentare: 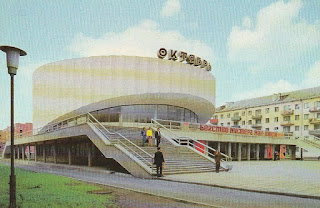 The cinema Oktyabr (October) opened on January 30, 1975 on the site of the former cinema Zorka (Star) with the film Blockade (USSR, 1974).
The architekt was W.M.Malyshev. It had one hall with 1.388 seats in the form of an amphitheater. After modernization in 2012, it has still 1.180 seats and a screen 22 by 10 meters.
You can see on the postcard advertisement for the film Бегство мистера Мак-Кинли / The Flight of Mr. MacKinley - a 1975 Soviet science fiction film directed by Mikhail Schweitzer.
Here you can read more about old and new cinemas in Minsk. 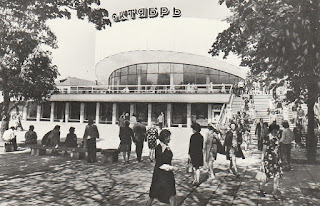 Here is another postcard from this cinema from 1978.

The cinema seems to be closed. In the building there is today Maxshow Disco Club. 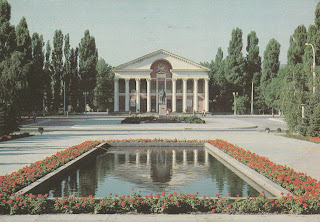 Novorossiysk is an important Russian port on the Black Sea with about 240.000 inhabitants.
Cinema Ukraina was opened in 1955, K.M. Michailov was the architect. The postcard is from 1984.
In 1997, the building was opened as the City Palace of Culture. It provides leisure for the population, conditions for the development of folk art and amateur art to all citizens.
The building is located on Lenin square, you can see the statue of Lenin in frint of the cinema.
Eingestellt von cinepostcard Keine Kommentare: 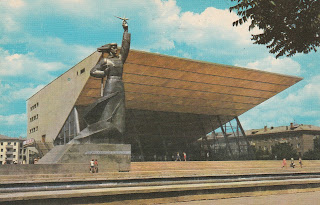 Krasnodar is the 16th most populated city in Russia with more than 1.000.000 inhabitants.
Cinema Awrora opened there on 13 May 1967. The cinema was a project by Sochi Design Institute Giprokommunstroy under the direction of chief architect Yevgeny Serdyukov.
The cinema has two halls, a big one with 1.179 seats and a small one with 130 seats.
Now it is closed for reconstruction. As written on website an open air cinema shows movies meantime.
The sculpture of Aurora impresses the view of the cinema. It was created in 1967 on the 50th anniversary of the October Revolution by Ivan Shmagun. Aurora is the goddess of dawn in Roman mythology. But it has also a political statement. On 25 October (7 November new style) 1917, the cruiser Aurora in Petrograd (now Saint Petersburg) fired the first shot, signalling the beginning of the attack on the Winter Palace.
The opening movie in this cinema was Залп «Авроры» / The Salvos of the Aurora Cruiser by Yuri Vyshinsky from 1965 about October Revolution, shown in 70mm format.
Eingestellt von cinepostcard Keine Kommentare: 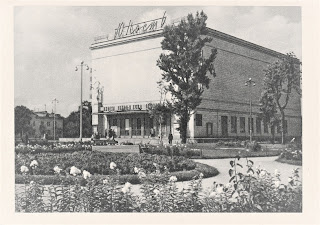 The cinema Юность / Yunost (Youth) - a typical Soviet cinema - was built in the years 1957-1960 according to the drawings of the architects Victor Matveevich Fromsel and Oleg Ivanovich Guryev. On the facade lined with pink tiles - sculptural images of a girl with a ribbon fluttering overhead and a young man with a lamp - disappeared in the 1990s.
Since 2003, the building has been owned by Balthouse LLC. They wanted to demolish the cinema and build a residential building in its place. Later it was decided to convert the house into a shopping and entertainment complex with a small cinema.
Today there is a restaurant Yunost in this building, but no cinema. 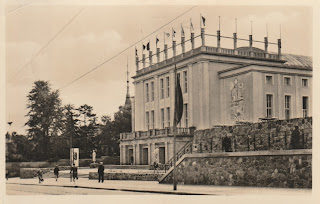 This postcard is from 1955, when the rebuilt cinema opened again.
The house was built in 1910 as a concert hall and restaurant by Ludwig Engel. Since 1919 it has used as a cinema with more than 1.000 seats, Decla-Lichtspiele managed by Max Perlinsky. It was destroyed inside in World War II, but had good chances for a reconstruction. In 1954 the works started after plans from Wilhelm Flemming.
The Lichtspieltheater der Jugend (Cinema of the Youth) opened on April 30, 1955 with the new East German comedy Sommerliebe. I'm not sure, if the poster in front of the cinema advertises this movie.
The sculpture left of the entrace shows a debris woman, remembering the destroyed and rebuilt city. The sculpture right of the entrace shows a steel craftsman, because Frankfurt (Oder) was a center of steel production.
The cinema closed in 1998, when a new cinema opened in the city. It is a listed monument, but not a nice monument. There were and are different plans for a new chance of this interesting building, maybe a museum of modern arts. Look at this facebook site.