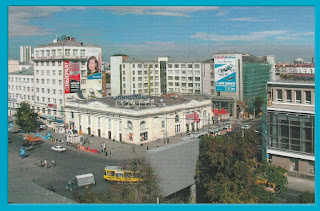 The cinema Kolizey (Coliseum) is (or was?) the oldest cinema in Yekaterinburg. The house was built in 1845 as the City Theater, the architect was Karl Tursky (1801-1884). The first cinema screening in Yekaterinburg took place in this house on November 7, 1896. A board on the building remembers this.

In 1914, there was opened the cinema Kolizey. After the 1917 revolution, the cinema was renamed October. In 1968, when the Salut cinema burned down, the October cinema was specialized as a children's cinema.

The historical name was returned in 2002 after the last reconstruction with 2 halls (280 and 33 seats).

When the photo was taken, cinema advertised the movie Garfield 2 (USA, 2006).

The cinema has closed for reconstruction since January 2019.