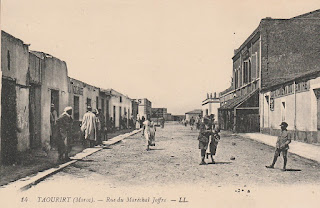 Taourirt is located on the eastern outskirts of Ouarzazate. Its biggest attractions: The Kasbah and the Cinema Museum. The Kasbah is one of the largest Kasbahs in Morocco, built by Pasha Glaoui in 19th century. The Cinema Museum is located opposite Taourirt Kasbah and has collected memories of the films that were shot here.
Did you know, the Ouarzazate area is a noted film-making location, with Morocco's biggest studios inviting many international companies to work here. Among them films like Lawrence of Arabia (1962), The Man Who Would Be King (1975), The Living Daylights (1987), The Last Temptation of Christ (1988), The Mummy (1999), Gladiator (2000), Kingdom of Heaven (2005), Kundun (1997), Legionnaire (1998), Babel (2006) Hanna (2011), The Hills Have Eyes (2006), and Salmon Fishing in the Yemen (2011)
It was also the location of an episode of the television series The Amazing Race 10, Game of Thrones (Season 3), Prison Break (Season 5).
But I couldn't know anything about this Café Cinema du Centre on the right. The postcard is maybe from the 1920s.
Eingestellt von cinepostcard