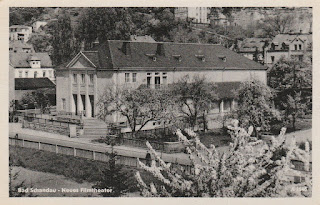 It was closed as a cinema in 1991 and used briefly as a games library. In October 2001 it was opened as the Saxon Switzerland National Park House. The building was gutted for this. The exterior of the building has been well preserved and adapted to the new task.

The building is a historical monument.

The old analog projectors also got a second chance. They are now used in the Dresden cinema Museumskino Ernemann VII B. The museum cinema has been part of the Dresden Technical Collections since 2002. These are located in the former Ernemann factories (later Pentacon). Cinema projectors and cameras were manufactured here for almost 100 years until 1991.