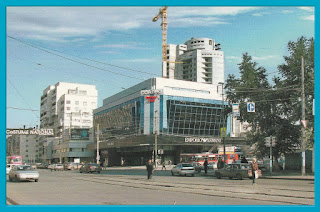 Cinema Dom Kino (House of Cinema) is not the big new house in the foreground.  It's the higher house on the left. You can see a billboard for the movie Девушка из воды / Lady in the Water (USA, 2006) there. (But I bought this postcard with the inscription on the backyard "Dom Kino" ...)
Dom Kino belongs to the Sverdlovsk Regional Organization of the Union of Cinematographers of the Russian Federation and was opened on April 2, 1983. The architect was V.V. Permyakov.
The sculpture Muse Cinema is located above the entrance, created by Andrey Antonov.
There are two halls in the cinema: the big one with 269 seats and the small one with 53 seats.
Today it is one of the most important cultural centers of Yekaterinburg, where major creative and social events, Russian and international film festivals were held.
It would be glad about a better postcard with this interesting place ... But I am glad finding a Wikipedia-site only for cinemas in Yekaterinburg. Отлично.
Eingestellt von cinepostcard