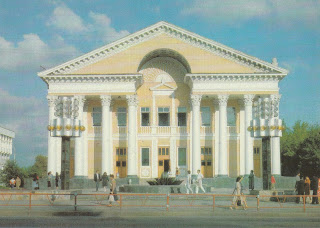 The Cinema Rodina (Motherland) is an historic cinema building in Lenin Street, the main street of Ufa. The building was opened in 1953, and is still working.
The cinema was built according to the project of architect Semyon Ivanovich Yakshin in the style of Stalin's Empire. The cinema had two large cinema halls - named Red and Blue, each with 350 seats. A small Green Hall with 60 seats was used for showing cartoons and documentaries.
On the opening day in July 1953, thousands of Ufa residents visited the new cinema and watched the film Незабываемый 1919-й год / The Unforgettable Year 1919 (USSR, 1951).
In the 1990s, the cinema building underwent reconstruction, the cinema equipment was replaced.
It is now a listed building.
The cinema often holds film premieres with the participation of Russian filmmakers and also weeks of thematic cinema (Russian Film Festival, Indian Cinema Week, Kazakh Cinema Days).
The cinema building looks very similar to Cinema Ukraina in Novorossiysk, even I named there another architect.
The postcard is from 1990. 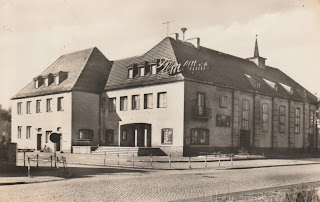 Schwarzheide is a small town about 140 km south of Berlin. When the postcard was printed in 1963, about 8,200 people lived there. Today fewer than 6,000 people live there. But it is an important town thanks to lignite. A plant was built in 1935 in Schwarzheide as a hydrogenation plant for the production of synthetic gasoline and has primarily been used for polyurethane production since 1972. After Ludwigshafen, the production there is one of the largest European locations within the BASF group.
This cinema opened in 1940 in Schwarzheide. The owner was Hans Prinz, he called it Prinz-Lichtspiele. It had 481 places. With the nationalization, the name was changed to Filmbühne.
Films were shown there until 1991.
The building has been used as a town hall since 1998.
Eingestellt von cinepostcard Keine Kommentare: 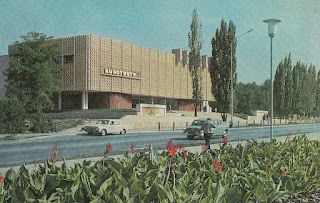 Kislovodsk is a spa city in the North Caucasus region of Russia located between the Black and Caspian Seas. It has about 120.000 inhabitants.
Cinema Rossiya was opened in 1970 with 1000 seats. It closed in 2008, the postcard is from 1974.
There are plans for a culture center in it.
Eingestellt von cinepostcard Keine Kommentare: 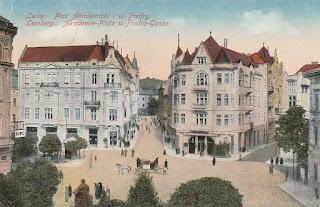 This postcard was printed in Kraków in 1916 and sent with military mail in the same year.
You can see on this postcard only a sign "Kino" on the left building. This house was on Academic Square 5 in Lemberg, now Shevchenko Avenue No. 28 in Lviv and is still standing. And there has been a Cinema for nearly 100 years.
First cinema Corso was founded in 1912 by engineer Karol Zygmunt Richtmann in his own home on  Academic Square, 5. In 1912, the owners of the cinema became the entrepreneurs Herman Opat and Ludwik Kuchar. In the 1920's, a reconstruction project developed by architect-engineer V. Litvinovich expanded the auditorium. In 1926 the cinema was called Warsaw, in the same year its name was changed to Rokoko.
In 1928-1938 - the cinema was called Pan and had 246 seats for spectators. After August 1938, the cinema operated under the name Rialto, which remained until the end of the German occupation (1944). The project was designed by architect-architect Adam Mściwujewski. Made in 1930s styling, it consisted of a light box 4.50 m wide for the cinema repertoire and neon signage. In 1936, the movie theater was headed by Maria Majewska and the owners were Leon and Celina Brenner and Helena Lippel.

After the Second World War cinemas were restored immediately, the cinema was organized in August 1944 with the name Pioneer and in 1950 it was renamed Georges Cinema. In the early 1990's, it was named after Taras Shevchenko.
Since 2012, the Grushevsky Cinema & Jazz restaurant has been located here.

I was delighted to find this information with good pictures here.