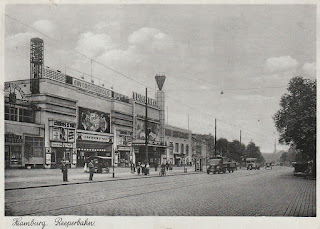 On February 24, 1927, the Schauburg am Millerntor opened directly next to the Trichter dance hall on the Reeperbahn. The Schauburg was designed by the architect Carl Winand (1879-1955) in the style of the New Objectivity and had 1,800 seats. The cinema was opened with the film Laster der Menschheit / The Vice of Himanity (Germany 1926), directed by Rudolf Meinert starring Asta Nielsen. She herself was there on this evening. The newspaper wrote: "In precious garb, with a gold ribbon stretched over her forehead, she deigned to watch the game on the white wall from the rank box in the company of her male state."

The first sound film was shown here in Hamburg on January 23, 1929. It was the German film Ich küsse Ihre Hand, Madame / I kiss your hand, Madame with Marlene Dietrich.

Today there isn't any cinema called Schauburg in Hamburg.

On the postcard you can see advertising for the film Die große und die kleine Welt above the entrance and next to the door with Viktor de Kowa and Heinrich George, directed by Johannes Riemann. The film came on March 20, 1936 to German cinemas.

The postcard was sent to the Döhnert siblings from Hamburg to Dresden in 1938. Döhnert was a piano manufacturer in Dresden and the family lived in this house.