This impressive building stood in Lüdenscheid from 1939 to 1971. The architect was Hans Huth. The cinema was opened with 1074 seats. The owner was Franz Bruckmann, who had cinemas in Lüdenscheid, Dortmund, Düsseldorf, Berlin.
I think, the postcard was published in the first months of the cinema.
It is not far away from Apollo Service Kino in Altena. 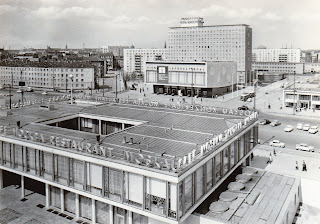 Kino International was opened on November 15, 1963. This photo was taken in May 1964 and published as a postcard by Kunstanstalt Straub und Fischer in Meiningen.
The cinema advertises Festtage des sowjetischen Films in der DDR / Festival of Soviet film in the GDR. As read on the website of DEFA-Stiftung there were shown movies like Die Ballade vom Soldaten / Баллада о солдате / Ballad of a Soldier (Director: Grigori Chukrai, USSR 1959), Die Kraniche ziehen / Летят журавли / The Cranes are Flying (Director: Mikhail Kalatozov, USSR 1957) and Ein Menschenschicksal / Судьба человека / Fate of a Man (Director: Sergei Bondarchuk, USSR 1959). And maybe one of the famous Soviet fairy tale movies?
Eingestellt von cinepostcard Keine Kommentare: 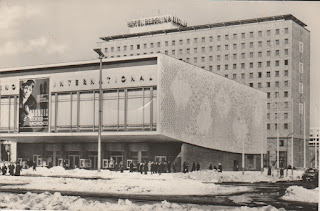 This postcard is a photo sent as a postcard in 1967, a unique postcard. The photo was taken maybe in February 1965, when the movie Chronik eines Mordes / The Story of a Murder was shown at Kino International. It is an East German DEFA movie following the novel Die Jünger Jesu by Leonhard Frank. Director was Joachim Hasler. You can see the actress Angelica Domröse in the main role at the poster.
The poster was designed by Erhard Grüttner.
Eingestellt von cinepostcard Keine Kommentare: 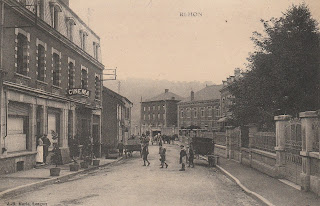 Réhon is a commune in North-Eastern France, next to Belgium. In 2016, there lived about 3800 people. I think the picture was taken in the early 1910's, then Réhon had about 2050 inhabitants. Réhon was a center of steel smelting in the 19th and 20th centuries. At the beginning of the 20th century, the number of inhabitants grew strongly. Of corse these inhabitants wanted some friendly hours after work. A cinema opened in Réhon.
Maybe the photo was taken for the opening of the cinema. You can see a couple in the entrance. And five small trees decorate the street. I couldn't find anything about this cinema. I think it didn't work long time. But a postcard is left. 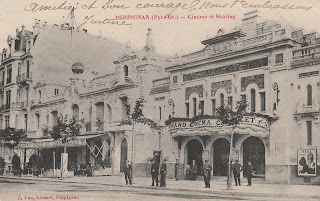 Perpignan is the France's most southern city with about 120.000 inhabitants, 13 km west of the Mediterranean coast. The Castillet is a famous fortification in Perpignan, partly destroyed in the early 20th century. Cinema Le Castillet is located on the plot of land left vacant by the destruction of Perpignang's historic ramparts.
The cinema was inaugurated on November 7, 1911 in a new yellow painted building in modern style. The architect was Eugène Montès, sculptures were created by Alexandre Guénot. At that time cinemas opened normally in already existing buildings, mostly inns  and hostels. So it is one of the oldest cinema buildings in the world.
And still in activity Le Castillet can claim today the title of the oldest cinema in France. The facades and roofs are listed as historic monuments in 1997.
Joan Font (1884-1977), who personally knew the Lumière brothers, founded the cinema, which has since been owned by the family. Originally a single hall with 1.100 seats, the Castillet becomes a multisalles of six the eight screens for capacity of 1.872 seats.
You can read on the postcard "Cinema et Skating". There was an open-air roller skating on the first floor, very fashionable at this time.
You can also see avertising for a movie Bébé. Bébé was a series of comical mute shorts made between 1910 and 1913 by Louis Feuillade. But I couldn't find among the French Wikipedia list a movie with a prince (like written on the display stand). The postcard itself was sent in 1915.
Today Perpignan is also famous for the L'institut Jean Vigo, the second most important film cultural institution in France. 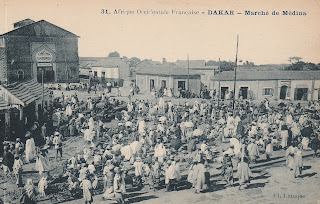 Cinéma Sandaga was located at the famous Sandaga market which still exists today. The cinema was opereating in the early 1930's.
The postcard itself looks like a frame from an interesting movie. I'd like to see it. Who opened this cinema, which movies were shown, who saw them, went women there?
Here you can read more about cinemas in Senegal in the interwar period.
Eingestellt von cinepostcard Keine Kommentare: 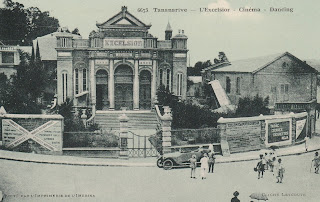 Madagascar - second country named after a movie (first one was Brazil:).
I got a good offer and bought some old postcards, among them this exotic one. The postcard shows Madagascar's very first cinema Excelsior. It opened in 1922. It was a place for cinema, skating and dancing - like written above the door.
Lamia Belkaied-Guiga published the book Regarder des films en Afriques about cinemas in Africa, there Karine Blanchon wrote about cinemas in Madagascar.
You can see on Wikipedia side Antananarivo a picture with two other old cinemas in this town: Ritz and Rex, opened in 1929.
Eingestellt von cinepostcard Keine Kommentare: 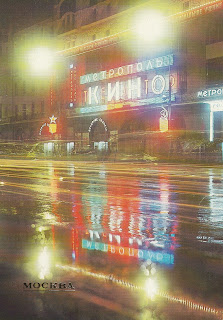 It is not easy to know something about this cinema. It is not listed on Russian Wikipedia side Cinemas in Moscow.
It was right in the building of the Hotel Metropol, a famous hotel in Moscow, built in 1899-1907 in Art Nouveau style.
In 1908, a novelty of the entertainment industry of that time appeared - the Opera-Kinemo, later named Modern. It was the first two-hall cinema in Moscow, changed its name in Soviet times into Metropol. Now it is closed.
Here you can see some interesting pictures from the cinema.
It is easier to find this postcard then some information about Cinema Metropol on the internet. I bought this postcard on eBay. 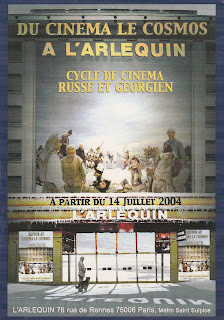 L'Arlequin is a  cinema in Paris opened in 1934 as the Lux Rennes. Lux, because it was situated in the building of its patron, the Compagnie Parisienne d'èletricité. The art-deco, air-conditioned 500-seat theatre, with 12-metre screen and adjacent bar was somewhat luxurious for the period.
In 1962 French filmmaker, director, Actor and screenwriter Jacques Tati acquired the cinema and named it L'Arlequin. From 1976 to 1991 the theatre was programmed by the Soviet film export agency to serve as a showcase for Soviet films, allowing to discover directors like Andrei Tarkovsky and Andrei Konchalovsky.
L'Arlequin regained ist current name in 1991. Today the cinema has three halls with 94, 102 and 395 places. It is still known for ist specialisation in German and Russian movies.
The postcard is an ad card for a movie series with Russian and Georgian films in 2004.
Thank you, Aldo, for this postcard! 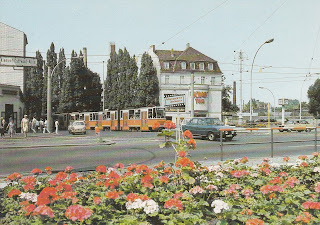 100 years ago Fritz Wilms and Max Bischoff started building a residential house with a movie theater in Berlin-Weissensee.
It was first cinema by the architect Fritz Wilms (1886-1958), but not the last one. He designed more than 15 cinemas in Berlin between 1920 and 1951. The cinema opened on September 4th, 1920 with 456 seats and the name Decla-Lichtspiele. Decla (originally Deutsche Eclair) was a German film production and distribution company. In 1921 Decla was absorbed into the UFA-Company and the cinema changed its name in UFA-Theater. After World War II UFA-company and this cinema were damaged. The cinema opened at Christmas 1948 with the new name Toni Film-Bühne, Toni because it is situated at the Antonplatz. In 1979, the last privately-owned cinema in East Berlin had to give up, because of high investment needed. The district film directorate Berlin took over the cinema and opened three years later the converted hall with 277 seats, now with the name Kino Toni.
In 1992 the film director Michael Verhoeven bought the Toni, renovated it and expanded it with a small hall Tonino. Now it is called Kino Toni & Tonino.
For more pictures and information look at Kinokompendium.

The postcard is from 1989, the picture from 1987. The advertised movie Die Bestechlichen / Les Ripoux / My New Partner is a French movie from 1984, came to East German cinemas on June 5th, 1987.
I love this busy street scene with typical East German vehicles.
Eingestellt von cinepostcard Keine Kommentare: