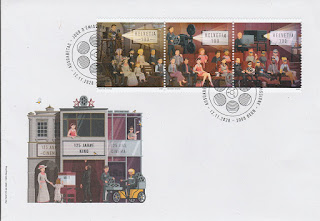 This first day letter is a gift from my sister. In December 2020, the cinema celebrated its 125th anniversary. Thanks to the Swiss Post, I was reminded of this. The birthday party was bigger 25 years ago ...

I love these stamps illustrated by Michael Stünzi. Cinema culture changed in the 125 years of its existence. On the left stamp a scene with the projector used by the Lumières is shown, in the middle can be seen classic rolls of film, and on the right there is a digitally presented 3D experience. The cinema audience wears the fashion of the respective era.

I like the creative idea that everyone is sitting in the same two rows, connected through the times (look at the different chairs!) - and printed as stamps together. Maybe the girl left is the older woman in the middle. And the man with the mustache in the middle could be the old man on the right (without the 3D-glasses). The projectionists were not forgotten either. Even if I would have liked it better if the woman in the middle had worn dungarees...

You can see on the envelope a cinema-building in the three ages with people also showing on the stamps. At all, you can tell little stories with these little pictures.

Times are changing and the cinema as a place looking films together will continue. Hopefully! Let's be creative!
Eingestellt von cinepostcard