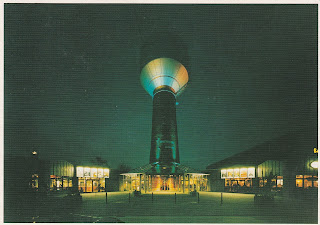 Alsdorf is a city in West Germany near Aachen and the border to the Netherlands.
The tower was a water tower in Alsdorf, built around 1910 for the waterworks with a capacity of 1000 m³ on a brick shaft. In addition to its value as an architectural monument to the city of Alsdorf, the tower also has a symbolic character for the city and especially for the Cinema Center.
In 1997 the historic water tower got a new interior. The Alsdorf cinema family Stürtz, which has been writing cinema history for Alsdorf since the 1930s, developed the idea of building a completely new kind of cinema and leisure experience space at the same location or in the immediate vicinity. A few meters from the existing cinemas in Rathausstrasse, the old water tower in the middle of Alsdorf, offered itself as an ideal area for the realization of such a project.
Today they have two cinema locations in immediate vicinity: In the Rathausstrasse the KINOPARK with Thalia, Atrium, Gloria and Forum and in the Hubertusstrasse the CINETOWER with the halls Tower 5-9.
The postcard was published by Filmstiftung Nordrhein-Westfalen, the photo was taken by Clemens Kisselbach.
Eingestellt von cinepostcard