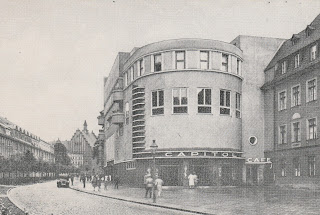 Wałbrzych is a city in the Polish Lower Silesian Voivodeship near the Czech border. Until the early 1990s, it was the center of the Lower Silesian coalfield. The city has had the Polish name Wałbrzych since 1945, former it was the German Waldenburg.
The cinema Capitol was built in a modernist style by the architect Ludwig Moshamer. The opening took place on December 28, 1928.
After the war, it was the Mining House of Culture of the Thorez Mine. (I went to Maurice Thorez school in Leipzig...).
There are plans for a reconstruction and using again as a House of Culture.
Here I found many pictures of the cinema building.
The postcard is from a postcard calendar from 1980 Waldenburger Bergland.
Eingestellt von cinepostcard