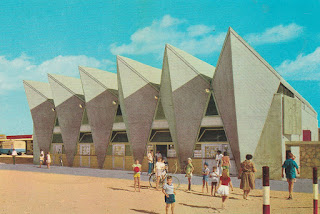 Beer Sheva is the largest city in southern Israel in the Negev desert - also called the "Capital of the Negev". The city as well as the entire southern region of Israel, has been a test field for modern architecture and planning since modern settlement. The result is partly very successful, partly sobering.

Among these buildings, there is the cinema Oroth Hanegev ("Ligth Cinema") built in the Brutalist Art Moderne style. It was designed by Yaakov Rechter (1924-2001) under the supervision of architect and father Zeev Rechter (1899-1960). The cinema was opened in January 1960 with The Bridge on the River Kwai (USA 1957) and closed in December 1989.

The 800 seat cinema was commissioned by local businessmen, brothers Hillel and Shimon Felchinski.

In December 1989, the cinema was closed. The building is still standing, now boarded up and decaying and still a striking and unique building.

For me, cinema from Israel is very much associated with the black and white film Life according to Agfa (Israel 1992, director Assi Dayan). The film was released in German cinemas in 1994. It was one of the first films that I showed in the small cinema Casablanca. I felt very connected to the young woman with the camera behind the bar. We both wore dungarees at work ...