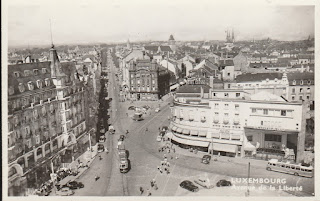 The cinema Eldorado - the building in front on the right - was opened on 30th December 1949 with The Heiress (USA, 1947). The cinema was designed in a streamline moderne style. A feature of the exterior of the building was the circular marquee, and the open spiral staircase to the balcony level, which began on the street on the right side of the entrance, rather than inside the foyer.  The cinema had 730 seats in the orchestra and 270 seats in the balcony.

Next to the cinema Eldorado, the cinema Europe opened in December 1963. In the picture the place is undeveloped. Both cinemas belonged to the family Reckinger.

In June 1982, the Eldorado was converted into a 4-screen cine-centre. The balcony was extended forward to create a hall with 364 seats. The former orchestra seating area was tripled.

Eldorado and Europe were closed in November 1988 and demolished in 1989. Now there is a bank on this place.

In the photo you can see advertising for the films Die verschleierte Maja (Germany, 1951) and Truxa (Germany, 1937).

Here you can learn more about the history of cinemas in the Grand Duchy Luxembourg.