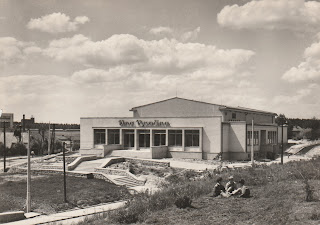 Žďár nad Sázavou is a town in the Vysočina Region of the Czech Republic. It has now approximately 21.000 inhabitants and is the administrative capital of the Žďár nad Sázavou District. The city is a prominent centre of tourism, situated on a major rail link between Prague and Brno.
The town gained prominence after 1945 when the communist government decided to build steel works in the city, called ŽĎAS. Within less than twenty years the Population grew from about 3.000 in 1950 to 15.000 in 1969.
New residential areas were also built with the necessary social buildings, including the cinema.
Kino Vysočina opened on 15 August 1963 with the screening of the wide-screen and colorful Slovak film Jánošík  and was one of the most modern cinemas in Czechoslovakia.
In 2011, the cinema underwent the aforementioned digitization, and in 2014 the cinema operation went under the administration of the town.
Eingestellt von cinepostcard