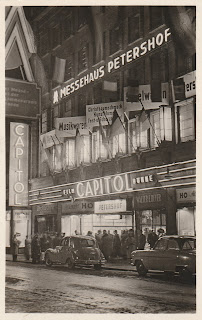 Leipzig's tradition as an important trade fair location in central Europe with one of the oldest trade fairs in the world dates back to 1190. The Petershof built from 1927 to 1929 as a trade fair building by architect Alfred Liebig (1878–1952). There was also the Capitol cinema until 2003.
The cinema was opened in 1929 with 1714 places in one hall. The Munich film group Emelka was the owner of the cinema. Emelka had to file for bankruptcy in November 1932 because its theater chain was unable to cope financially with the conversion to sound film. So the UFA was the new owner of the cinema.
For a long time it was the biggest cinema in East Germany.
Here had taking place since 1955 one of the oldest international film festival for documentary and animated film, now called DOK Leipzig.

From 1970 to 1993 there was also the smaller Capitol Studio Kino next to the main hall.
In the 90s the Capitol was converted into a 4-room house.
In 2004 and 2005 the Petershof was rebuilt. Apart from the facade to Petersstrasse, the atrium and the round staircase, all parts of the building were torn down and a department store was built into the building fragments.