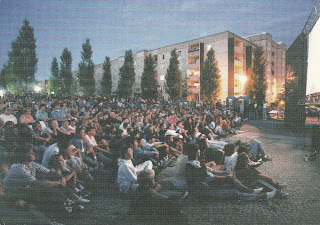 In 1994, the Wohnungsbaugesellschaft Hellersdorf (WoGeHe - a housing association, today Stadt und Land) stretched  a canvas between two steel scaffolding on Stendaler Strasse for the first time. A new open-air cinema was born. Viewers could enjoy the films free of charge from the balcony or from the space in front of the screen. Everyone brings their own chair. Balkon-Kino  - Balcony cinema.

In 2005, the Balkon-Kino moved from Stendaler Strasse to Cecilienplatz, and shows four films in one season.

The postcard is a free postcard from the Wohnungsbaugesellschaft Hellersdorf, published between 1994 and 1999. I like this view of the audience.