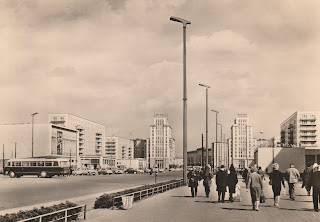 Another postcard in my collection of Kino International in Berlin. It is a view of Karl-Marx-Allee (until 1961 Stalinallee) with the cinema on the left, looking east to Strausberger Platz. The two 14-story high-rise buildings were built in the 1950s as Haus des Kindes (House of the Child) and Haus Berlin. In addition to the apartments for hundreds of workers, there was a dancing bar in Haus Berlin and in Haus des Kindes there were a puppet theater, a kindergarten, a children's department store and a children's cafe.

It wasn't easy to read the advertised movie on the poster. I could identify it with the help of the book Mehr Kunst als Werbung. Das DDR-Filmplakat by Detlef Helmbold (even if the poster does not match the illustration in the book). It is the Polish movie Die Frau, die man nie vergessen kann / Naprawdę wczoraj (Poland 1963, directed by Jan Rybkowski). This movie was released in East Germany on July 10, 1964.

The postcard was published in 1965 by Gebr. Garloff KG Magdeburg.

In October 2020 I visited Berlin and Kino International. There was a little interesting exhibition inside Pavillions für die Karl-Marx-Allee. And I heard, that Berlin's Karl-Marx-Allee should be on the Unesco World Heritage List.

I didn't see a movie there. I preferred to walk along Karl-Marx-Allee to Warschauer Strasse. I was amazed that there was so little going on on the avenue on a Saturday afternoon. 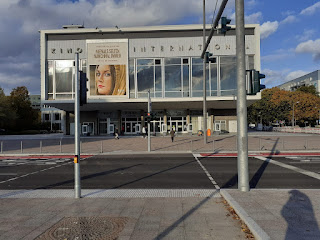