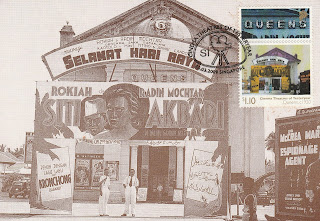 It's not easy to read the cinema's name in the middle of all these posters.
Queen's Theatre is a cinema in the Singaporean suburb Geylang. It opened in 1930 as Wembley Cinema.
In 1939 the name was changed into Queen's Theatre.
The photo is from autumn 1940 and the advertised movies are:
- Espionage Agent (USA, 1939)
- Siti Akbari (Dutch East Indies, 1940)
- Her Jungle Love (USA, 1940)
- Block-Heads with Laurel & Hardy (USA, 1938).
The writing at the top does not announce a new film: They are greetings for the Muslim Festival of breaking the Fast. Greetings connected with the names of poplar actors Rokiah, Radin Mochtar, Kartolo, Annie Landouw and Titing - all from Indonesia.
Also the poster at the bottom left doesn't advertise a film either: Kronchong is the name of a ukulele-like instrument and an Indonesian musical style. Also popular at the movies.

So you had could spend a good time at the Queen's Theatre.
The cinema was closed in 1982.
In 2000, GrandLink Square was built on the site of the former Queen’s Theatre. Its front facade was kept and become part of the facades of the GrandLink Square.
Eingestellt von cinepostcard