Filmtheater am Hauptbahnhof in Dresden/Germany 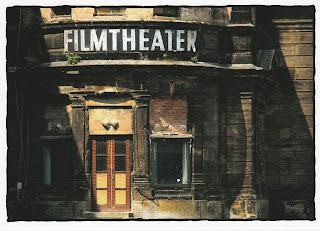 The photo was made by Tom Bäcker, he called it "Metropolis adieu". Unfortunately he didn't tell us the name of the old Filmtheater. But this is no problem, because I know the building. It was the little cinema next to the main station in Dresden.
The building is a part of the main station and was originally the entrance for the Royal family to the station (so called Königspavillon). After 1918 it was a ticket office. From 1950 to 2000 it has been used as a cinema. It is said it was a classical news theatre in its first years, where you could spend your waiting time watching the latest news.
I remember it as a normal cinema. Its speciality was the unique GDR (East German) atmosphere until the end in 2000 - still 10 years after the end of the GDR. It was like a museum inside with 100 % GDR atmosphere.
Now the building is renovated and only a normal entrance: no king, no cinema, no Dave ... 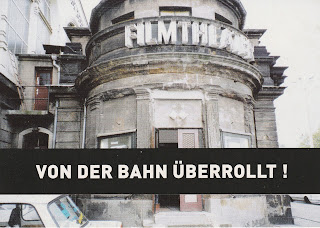 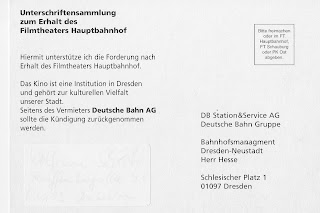 It is from the last days of this cinema in 2000, a protest postcard against closing addressed to the owner Deutsche Bahn / German Railways. "Von der Bahn überrollt! - Overrun by the railway!"
Eingestellt von cinepostcard Keine Kommentare: 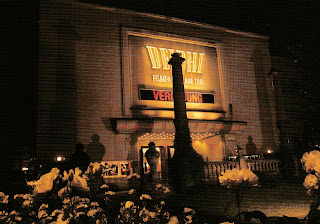 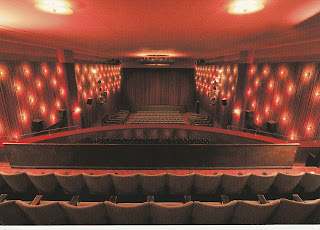 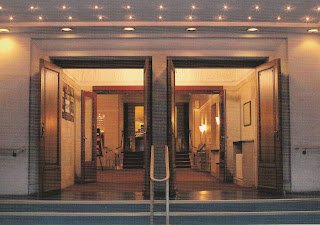 Three ad-cards show Delphi Filmpalast in Berlin-Charlottenburg. The house was built in 1927/28 and was used as a dance hall called Delphi Palace. In 1949 the house was reopened as a cinema, with now 784 seats in one hall.
The movie title over the entrance is a litte riddle because of the hidden letters - the title is Vergebung (in English: The Girl Who Kicked the Hornets' Nest, Swedish: Luftslottet som sprängdes, Sweden 2009). This movie run in summer 2010 in the German movie theatres.

I love the fan-shaped Delphi-emblem over the door, unfortunately not very well photographed at the postcard. It looks like a part of an arrow to the entrance. It is also used by the Delphi film distribution. This distribution started in 1985 with the rerelease of Billy Wilder's One, Two, Three (1961). Later this cinematic masterpiece has shown for one year at Delphi Filmpalast. 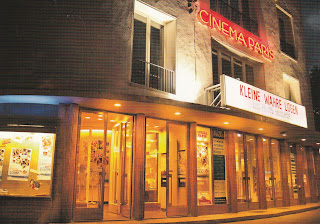 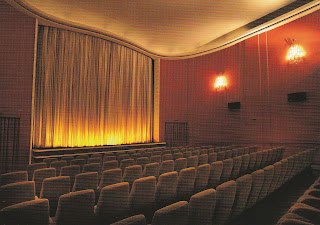 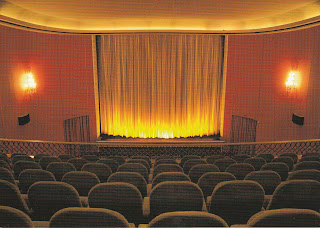 Three ad-cards showing Cinema Paris - situated at Kurfürstendamm 211 in Berlin. The house was built in 1897, after World War II it has been used as the French Culture Centre Maison de France. The cinema opened in 1950. It is still an one-hall-cinema with 325 seats. The name is the game: there are shown above all French movies in German and in French.
The cinema advertises the movie Kleine wahre Lügen (Les Petits Mouchoirs, France 2010), the movie came in July 2011 to the German screens.