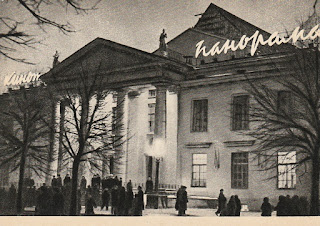 The house was built in 1910-1914 according to the project of the architect Nikolai N. Ignatiev as an exhibition pavilion of the Imperial Russian Society of Horticulture in the Tavrichesky Garden quarter. In 1955-1956 it was reconstructed into a cinema by the project of the architect I. I. Chashnik. The cinema was opened on November 5, 1958. It was one of the first large-scale projects in this segment. The hall was equipped with a panoramic screen 28 meters wide and 10 meters high, as well as stereo sound.

The loudest premieres took place here. For a long time Leningrad set the tone for the city's cultural life. By the end of the 20th century, the technical side of the cinema hall became obsolete, and the cinema life of the city moved to shopping and entertainment centers. In 2004 the cinema was closed.

After the reconstruction of the building by Ricardo Bofill in 2014, the Leningrad Center Show Space was opened in the building of the former Leningrad cinema. The art director of the show space is Felix Mikhailov, a well-known Russian theater, film and television director, screenwriter and producer. The repertoire of the show space includes large-scale performances at the intersection of various types of art: theater, musical, circus, ballet, kinetic art, puppet theater, video installations and 3D-mapping. In January 2018, regular film screenings were revived.

The postcard was published in 1959.

Here you can know more about cinemas in Sankt Peterburg.
Eingestellt von cinepostcard