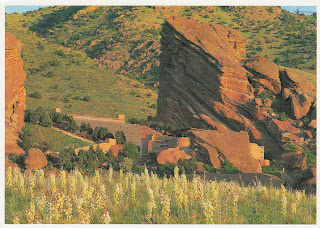 I got this postcard via postcrossing from Jess. She wrote "Believe it or not, this is a place to watch movies. Every summer and parts of Autumn and Spring, you can go to this Beautiful mountain area and watch films or concerts."
Red Rocks Park is Denver's mountain park on the foothills of the Rocky Mountains in the central part of the US state of Colorado. The Red Rocks Amphitheater is the main attraction of the 351-hectare park.
It is an open-air stage embedded between two approximately 100-meter-high sandstone cliffs, which can accommodate around 9,400 people and is known for its outstanding acoustics. The stage was completed in 1941, but was not used for a public event until 1947. Due to its size, it is suitable for large music and Theater events. The best-known artists who performed there also included the Beatles (1964), Bruce Springsteen (1978), Eric Clapton (1983), Sting (1985), U2 (1983), Neil Young (2000), Depeche Mode (2009), Disturbed (2016) and Bad Company (2017).
Since 1999, a joint production of the Denver Film Society and Denver Arts & Venues, Film on the Rocks was created to provide the community with an affordable opportunity to enjoy movies and live entertainment at the Red Rocks Amphitheatre.
Thank you, Jess, for showing me this interesting place!