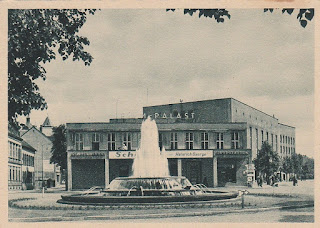 This cinema exists from 1937 till 1944.
Alfred Meyer, owner of the cinema Central in Kaiserslautern, built the generous movie theater with 850 seats in the hall of the Protestant Society House. The opening was on September 3, 1937 with the film Sieben Ohrfeigen / Seven Slaps (Germany, 1937). In 1944 the building was destroyed by bombs, the film operation had to be stopped. After the damage had been eliminated in 1950, the Pfalztheater moved in this building.
You can see on the postcard an advertised movie with Heinrich George. It must be the movie Schicksal / Destiny (Germany, 1942).
The fountain in front of the cinema is the Fackelwoogbrunnen, created by Friedrich Korter in 1939.
Eingestellt von cinepostcard